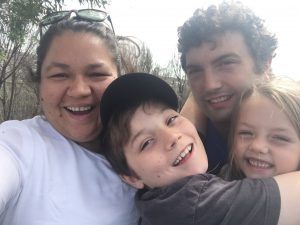 A few months ago I meet another family, and within 10 minutes of talking to them I was in tears. Someone ‘got’ us and knew first hand all the battles that we face, the daily struggles that we go through. It was a powerful moment.

In March 2017, my 9-year-old son suffered a stroke. He’s always been a very healthy kid but, in the blink of the eye, that all changed. One moment he was playing with his sister Amelia and the next he was starting to lose consciousness and had lost all speech and movement on the right side of his body. Zander spent almost three months at Monash Children’s Hospital receiving intense rehab.

During our time at the hospital, we had been advised of Heads Together for ABI and was told in brief what they do and the camps they offer. Gently we were nudged by all of our team, as Zander returned home and started his outpatient rehab, we decided to take a chance and give it ago. We attended our first camp in October 2017.

Since his stroke Zander’s interests were peeked by news reports about another stoke kid, whispers that a teen had had a stoke, that a child celebrity had a stoke. Zander has been searching for another stoke kid; he was searching for someone of his age that he could relate to, to know that he was not the only one. We all need to know that! We felt like all that we wanted all that we knew was forever changed and couldn’t really see how we could move forward.

I felt isolated. We are the only ones going through this…

I went to a friend’s house for a catch-up, and the mums were talking about school achievements and challenges they face. I felt so detached from that conversation, well I don’t know if he would be able to do that in the future, wouldn’t it be great to face that problem, and I got kinda angry listening to them talk. It wasn’t their fault; it was me. These lovely people that I have known for years are being the people that I love and doing what they would normally do, but I had changed their problems and situations were not what I was facing and I felt again detached.

I joined the FB groups, I reached out to find others, but how much can you get from reading texts and not talking face to face with someone? Sure I asked questions online but you never truly trust in a comment online, only because you don’t have the personal trust of someone on the other side of the world.

A few months ago I meet another family, and within 10 minutes of talking to them I was in tears. Someone ‘got’ us and knew first hand all the battles that we face, the daily struggles that we go through. It was a powerful moment; I found we are not the only ones and it pushed me to meet others.

Attending HT camp for us was a real driver, a step to moving on with our lives, a step to acceptance and meeting others who we could relate to. The families that we had met at HT are an incredibly accepting group of people. No one asked why Zander was using a wheelchair, because at some point most of them have. Kids needed to have meds; others needed to rest to manage fatigue. Most of the kids only attended school part-time.  All have at some point been in a hospital.

These families have navigated the systems and are a great source of help for me. Return to school tips, Centrelink and NDIS info. Getting told by a professional and getting info from someone who has been there done that are two very different things.

Seeing the older kids going on and working on their goals for me was a relief. Yes he can go on and make a life for himself after high school.

Because of his recovery, he has had to spend a lot of time at the hospital, and at home, that common thread that kids build was slowly dissolving. His good mates have stuck by him, but they can not relate to some of the things he has been though. Kid talk that needed to happen was not happening. Zander and our daughter Amelia were very excited about attending camp. Zander made some new friends, one had also had also had a stroke and another friend that had been in a car accident. During camp he had kid talk about rehab and medical procedures. He played like he hasn’t since before his stroke. One of the physios from MCH commented on how she had never seen him run so much. He pushed his social, emotional and physical limits. At HT camp he decided to write with his right hand unprompted, which was a first.

Although we try to ensure that Amelia is spending time with her peers, because of our time spent at the hospital and also because of Zander’s fatigue management, she has often missed out.

For Amelia camp was great, seeing other kids with siblings with an ABI I believe has helped her to also see she is not the only one. It has also helped her understand Zander’s limits better and our new limits as a family.

Recently his physio said that ever since camp he is more committed and willing to push himself.  HT camp gave him a little extra drive to complete the mud run in November…He would say, well I could do it at camp, I will do it on the run.  I can also see in him that he wants to do more, because at camp he could see other kids with brain injuries doing more.

Kate – Founder of Heads Together

The Steptember Tally is in and Sim Kendall is offi

Grill'd Yarraville is generously giving us all thr

Our fabulous Heads Together Team have been hard at

A Big Shout Out to Footscray Domino's for sponsori

Heads Together is once again partnering with the V

Sue Sloan is a long time supporter of Heads Togeth

They say recovery after brain injury is a marathon

Happy Fathers Day to all our Dads, Grandfather's a

Once again our fabulous Heads Together Team are ta

Volunteers at Heads Together make everything we do

About seven years ago my friend Lara invited me to

Welcome back Taylor! Project HOPE is so happy to h

On Saturday, we hosted the Families Parents & Teen

Today is the final day of Brain Injury Awareness w